Those who can't board together, blog together! Join us at clinics, shows and at home for dressage coverage from an authentic perspective.

This site is not approved, or endorsed by the Nebraska Dressage Association. The views expressed on The Barn Blog are to be attributed to the participating blogger, unless otherwise noted.

Two weeks ago I was doing a pre-show groom on a horse at the barn. I was pulling his mane when a song by classic 90's angst queen Alanis Morrisette came on the stereo. The song sparked a small lecture on 90's alternative music, and the relative success of Ms. Morrisette throughout the years. Ebony (the horse getting groomed) was fascinated by the discourse on the irony of 90's angst rock getting rehashed on stripped down intimate acoustic albums a decade later. "Really Eb, she only ever had that one successful album, so I mean she had to re-release it. Everyone has a mortgage to pay!"

The horses love my music lectures.

Of all the things in this universe there are two I love above all else
1: My horse
2: Rock Music

Lucky for me, the proprietor of Colby Creek Stables (our home) is a kind soul whose young son shares my enthusiasm for a good guitar riff. It is under these conditions that I am able to rock out while I'm at the barn. A typical visit to the stable starts thusly: greet Dobby, use the restroom, turn on barn stereo. Dobs and I generally rock out to Fremont's Classic hits 105.5, and I'll argue here this is one of the better classic rock stations in Nebraska. From time to time, pending the presence of teenaged souls in the barn we jam to 98.5, modern hit music. Sometimes we even bop along to the oldies, depends on the day really.

Under no circumstance however, will country music be played when I am at the helm of the stereo system.

Good music, and a good horse, well it just puts me into the best mood possible. After a long day of legal wrangling at work I need to cut loose and unwind with my best man (Dobs) and I feel really blessed to have a place where I can enjoy both of my favorite things without fear of retribution. Rides seem better, tack gets cleaner time just flies at the barn with some rock music rolling in the background.

...and occasionally I am known to sing to Dobby. I'll bust out with most anything. Despite being a self-professed rock snob I happen to know the lyrics to 90% of the songs on the radio, and even if I don't like it, if I've had a good ride and I know the coast is clear I do sing along with the radio to dearest Dob. He seems to prefer my renditions of Eagles and Queen songs. It isn't all together uncommon to hear me mumbling lyrics to him while I groom, or do a little dance while cleaning tack.

I can't help it, when I'm happy I move I sing, there is nothing to be done about it but join in or laugh.
Posted by MissMargo at 8:33 AM 9 comments:
Labels: DQ Confessions

Recent events around my home front motivate me to post this rather obvious piece of advice: Know your numbers.

By "Know your numbers" I mean know the phone numbers for: Your barn owner/manager, Farrier, Vet, Back-up Vet, and Last resort vet. Program these things into your cell phone. Know the location of good cell phone reception at your barn.

Write these numbers on your horse's stall.

Have all these numbers written down somewhere in the barn so that everyone there can benefit from the plain-sighted-ness of the information.

Because of the availability of all the above listed numbers, and some quick thinking my knucklehead horse was able to receive the very best possible emergency care this weekend. It wouldn't have happened without the team of people I assembled via phone, while I drove from Lincoln to my barn after I was informed about the incident. SO once you've gotten all your numbers programed and posted, find yourself a team of go-to's. You may need them, you may not but its important to have a plan.

We never think our horses will get injured, but the truth is, they do, and in the most inopportune times. There is no way to stop a horse from being a horse, or getting into trouble, all you can do is make yourself ready for the inevitable. I'm very lucky to have had my tools standing ready, I hope you will all consider doing the same.

Editors Note: Due to the nature of my new employment, I have been learning a lot about animal biosecurity. Once you start to look at all of the places our horses go, it's really amazing that we don't have more trouble with communicable disease than we do! This article was edited from a press release published on The Horse e-newsletter. I am certainly not advocating ALL of these steps be taken on every farm, but at least you will know what to do should there be a reported disease outbreak in your area...a perfect example was the EHV outbreak on the FL show circuit last winter!
Simple Biosecurity Techniques Help Protect Horses from Disease Threats

In recent years, the months of the show season have included news of disease outbreaks that can pose a threat to the health of performance horses. More and more, horse owners are searching for simple and effective techniques to help protect their horses from these threats year round.
Knowledge and practice of basic biosecurity has become critical for horse health. Whether traveling, accepting new horses into a facility, or performing day-to-day tasks around the farm, an eye to sanitation and disinfection--as well as proper vaccinations and veterinary care--will help assure a healthy environment.
"When traveling, owners should be sure to maintain proof of vaccination for all of their horses, as well as an up-to-date Coggins test," said Robert Holland, DVM, PhD, senior veterinarian at Pfizer Animal Health. "It's also a good idea to keep daily temperature logs for your horses--particularly if they show signs of upper respiratory infections or other disease markers."
When at show ground or event, attendees should avoid taking their horses to common water or feed areas. They should also avoid sharing water buckets, lip chains, feed tubs, halters, or other items that might touch a horse's mouth, nose, or eyes. If you have to share items, be sure to follow proper sanitation and disinfection techniques first. In addition, any horse that shows signs of being unwell should be isolated as quickly as possible.
In order to properly disinfect equipment and tack, it's important to first remove all excess debris or dirt from the item. Then, wash the equipment in a detergent, such as laundry or dish soap and rinse with clean water. Follow this by filling a bucket with properly mixed, commercially available disinfectant and dipping the items into the disinfectant solution. Be sure to rinse them with clean water at least twice after disinfection. Keep in mind that disinfection might be needed on items such as halters, lip chains, grooming equipment, shovels, and pitchforks. Stall walls and flooring can be treated in the same manner as needed.
A simple disinfection solution in a shallow basin used as a footbath can also allow staff to clean their shoes when entering or leaving the barn area. Hand sanitizers can help to curb the cross contamination that often occurs between horses as staff move from one horse to another during the day.
Of course, a carefully designed vaccination program, created in cooperation with a veterinarian, is one of the best means of helping horses remain healthy during the show season, and throughout the year. 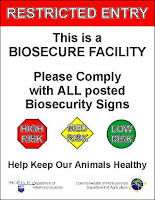 Posted by JameeLyn at 2:58 PM 1 comment:
Labels: Horse health, Horses In The News

I don't watch much TV these days, when I do have some TV time I really enjoy Project Runway on Bravo. I love Heidi Klum. She's gorgeous, and she's soo damn German. I love it when they pan to her face during the runway show. Her critiques and facial expressions are hilarious because they are so similar to facial expressions and the obviously toned down criticsm I've recieved from German riding instructors.

I should write Ms. Klum a letter urging her to start riding dressage. Or at least to work with a riding instructor as a mouth peice. She's perfect for the job!
Posted by MissMargo at 1:27 PM No comments:
Labels: TV coverage

Going to see this show is a great way to introduce your friends to the concepts of Dressage. I always enjoy the Quadrille work! It is so impressive to see the horses and riders work together in such harmony.
Posted by MissMargo at 9:29 AM No comments:
Labels: Equestrian Events

Deepest apologies to the readership of the Barn Blog for the dry spell on our little site! It's been a busy couple of months for your bloggers, but now with things (aka Margo's brain) settling into new routines the Barn Blog will march on in glorious fashion once more!
Posted by MissMargo at 7:56 PM No comments:

One of the great joys of horse ownership is realizing how "scary" common every day items truly are to your equine. A hose being drug through the arena, ladders against a wall, flower boxes, and fire. On Saturday morning I introduced Dobby to the notion of the "open flame." I'm happy to tell all of you, we both survived.

Initially, Dobby had his reservations. I mean, it's this flaming crackling thing with smoke. WEIRD! SCARY! He was jittery, but after about 15 min of riding with the fire burning in the pit outside he gave up the spooking, and surrendered to his curiosity. After a good long gander out the arena doors we moved on and had a nice quiet ride.

I'm a big believer in scaring the hell out of your horse. If I could find someone with a cannon, or a flame thrower I'd absolutely have them shoot the thing off while I was working with my horse. It's great for our partners to encounter new and different things, just as it is wonderful for we humans to travel and experience new and exciting things. It is my opinion that a "worldly" horse is a horse who has lead a full life, one who is assured of himself and can move through many sitations with ease.

What I'm leaving out here, is that depending on ths situation: the lawn chair, hose, ladder, open flame might be terrifying not only to the horse, but the rider as well. What we have to remember as riders in such situations, is that we are smart logical bipeds, who are very familiar with such things. By golly, we invented them! We've all felt the horror in the moment when our horse stops listening to us, and starts to hear only his instincts to run. It's okay, small circle...don't worry! Your horse should trust you enough to know when you are confident and secure standing next to a burning fire, he can be too.

Worst comes to worst, get off and look at the "monster" but don't give in to the fear. Ride away from the thing, and creep closer as your partner regains his confidence. There is no other situation in our human lives in which we would allow a garden hose to ruin our activity. Keep that thought close to you as your horse learns to trot over the hose, and when you hang your winter coat over that ladder against the wall.
Posted by MissMargo at 8:16 PM No comments:
Labels: Horse Ownership, Schooling, Spooks
Older Posts Home
Subscribe to: Posts (Atom)